Macro-Economic conditions continue to be challenging; LTROs offer some respite

The Consumer Price Index (CPI) in January ‘20 at 7.5% registered a high since June ’14. The ‘core inflation’ was also quite high at 4.2% on the back of hikes in telecom tariffs and gold prices. Given the mandate for Monetary Policy Committee (MPC) to maintain headline CPI within a range of 2% - 6%, cutting policy repo rates further is not easy.

However, RBI, in their bid to support the Government’s effort to revive economic growth, launched an indirect rate cut by introducing “Long-Term Repurchase Operations (LTROs)”. These 1 & 3-year Repos will be administered at the Policy Repo rate of 5.15%. At present, banks borrow 1 & 3-year money via term-deposits at rates above 6%. So, LTROs will bring rates down by about 100 bps in the 1 to 3-year tenors for the banks and eventually for the end borrowers.

Underlying demand conditions in the economy continue to be weak

Private Insurers continue to grow through a combination of products and channels. SBI Life grew the ULIP business via their agency channel, ICICI Prudential increased their share of the protection business while HDFC Life focused on the Participation policies.

With the exception of Kotak Mahindra Bank which continues to grow its CASA deposits and maintains this ratio at the industry highest level of 53%, other banks are finding it tough to grow these at low rates. The credit growth is hence funded by term deposits.

Cost of funds is coming down for banks, leading to improvement in NIMs. Kotak Mahindra Bank’s NIM stands at the highest level of 4.6%. 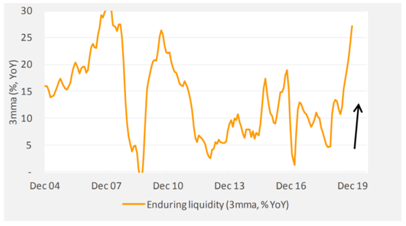 Markets will take advantage of the abundant liquidity conditions both globally and in India. The chart alongside shows how the durable liquidity growth is the highest in a decade. RBI’s liquidity stance is quite clear in favour of maintaining surplus liquidity.

The economic slowdown has been much sharper than expected by us and we believe that the recovery will be gradual.

Statutory Details: Trivantage Capital Management India Private Limited is a private limited company incorporated under the Companies Act, 2013 and having its registered office at 508, Arcadia, NCPA Marg, Nariman Point, Mumbai – 400 021, India and is registered with Securities and Exchange Board of India as a Portfolio Manager vide Registration Number INP000004656 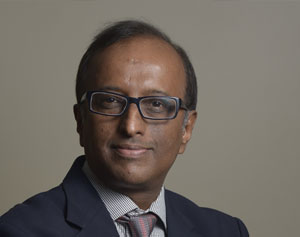